The last Pāla–Sena paṇḍita, Gautamaśrībhadra, at the ends of the Buddhist earth 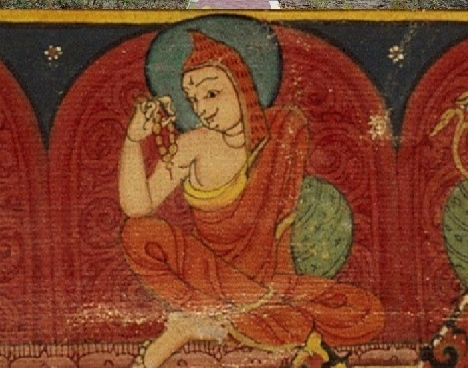 The thirteenth-century disintegration of the Pāla-Sena empire, the last state sponsor of Buddhism in its land of origin, left a fragmented milieu that is still being picked up and pieced together. On Karimun Besar island near Singapore is a short inscription that is unusually written in a Pāla-Sena script. For many decades after its discovery in the mid-nineteenth century it was misinterpreted. Today it can clearly be seen to give the name of a paṇḍita called Gautamaśrī. In 2018 it was found that this paṇḍita has the same name as that of a Bengali exile who was active in Nepal and Tibet in the middle of the thirteenth century. His story, which moves from the Himalayas to Southeast Asia in a period of global disruption, can now be told in detail for the first time.

Gautamaśrī, also known as Gautamaśrībhadra, was a young member of the cohort that fled the destruction of the last teaching monasteries on the Indian subcontinent. In Nepal he took up residence in Guitaḥ, an ancient monastic compound. A medieval avadāna relating to this monastery was most likely written by Gautamaśrī there. Gautamaśrī also conferred with his fellow exiles in Nepal, such as Vibhūticandra, and transmitted dozens of texts and practices to visiting Tibetans. They include works pertaining to the Kālacakra and Vajrāvalī/Kriyāsamuccaya tantric systems. Gautamaśrī visited Sa skya and his name reached as far as Beijing. However, Gautamaśrī was not like the many other thirteenth-century Indian Buddhists whose religion lived on only in the translations of the Tibetan canon. After avoiding disasters in the Himalayas and fundamentalization in mainland Southeast Asia, Gautamaśrī sailed to the ends of the Buddhist earth, reaching the islands of the Malay Archipelago. There, distinctive aspects of his expertise flourished: a revival of the Malay eight-armed bodhisattva Amoghapāśa, and a new cult of the ravenous deity Vajramahākāla. Gautamaśrī can also be linked to a paṇḍita who is said in the Sejarah Melayu to have co-founded a new dynasty in Sumatra. This lecture presents a range of previously unpublished findings on precolonial transnational networks, late Buddhism, Sanskrit literature and epigraphy, and the Indo-Malay kings.

Iain Sinclair is a lecturer at Nan Tien Institute, Australia, and an Honorary Research Fellow at The University of Queensland School of Historical and Philosophical Inquiry. He has been a Visiting Fellow at the Nalanda-Sriwijaya Centre, ISEAS–Yusof Ishak Institute, and a Käte Hamburger Kolleg Fellow at the Centre for Religious Studies, Ruhr University Bochum. His published research focuses on Buddhist tantra, Sanskrit manuscripts, medieval Asian history, classical art and contemporary religion. His specialty is the Sanskritic Buddhism practiced in the Kathmandu Valley and the Malay Archipelago.

Nan Tien Institute (NTI) is a private, not for profit, government accredited higher education provider offering studies in the areas of Buddhist studies, health and wellbeing, within an environment that incorporates contemplative education.

In accordance with the current restrictions our campus facilities are closed. You can continue to study online and our virtual library services remain available. Our academic and student services staff are online and by phone to assist you. Please stay safe.